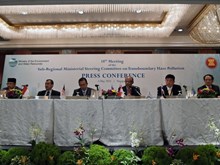 Kuala Lumpur (VNA) – Malaysia has called on ASEAN member countries to restart a high priority cooperation plan to fight haze pollution in the region by 2020. Speaking at the 12 th conference of parties to the ASEAN Agreement on Transboundary Haze Pollution (AATHP) in Kuala Lumpur on August 11, Malaysian Deputy Prime Minister Zahid Hamidi said some of the activities of the plan have been dormant due to a lack of resources. He requested the parties focus on the plan as it is significant in ensuring the goals of the AATHP. He also addressed high-priority areas which need to be done, including technical cooperation to mitigate risks to human health arising from haze from forest fires, as well as organising regular workshops to intensify the implementation of the AATHP. Referring to the worst haze pollution in history in 2015, the Deputy Prime Minister said the incident affected millions of people in Indonesia, Singapore, Malaysia, Thailand, the southern part of the Philippines and the northern part of Laos. ASEAN passed the AATHP in 2002 and the agreement was ratified by its all 10 member countries in January 2015.-VNA